Heres a quick step by step on how to do the conversion. This isn’t the Brassmasters version as they assume a wheelchange too, which if you’re doing EM/S4 is the most likely way forward. I didn’t want the expense of new wheels and bought the rods and Markits/Romford crankpins, (I’m embarrassed to say), years ago. Total conversion time for the first one start to finish was about three to four hours as I was working my way through the techniques, this includes soldering the rods together, finishing them and joining them with a crankpin rivet to give a prototypical knuckle joint. I’m also using a Peco PL-70 loco servicing cradle whilst I do much of the dissasembly. Its simple, cheap and effective.

Firstly remove the brake gear, this is a simple push fit, the locating pins are at either end and on the central brake shoes. The plastic is pretty flexible so you shouldn’t damage them. Refitting is a simple reversal at the end of the conversion.

Keeper/base plate removal is next, one crosshead screw at each end of the plate.

Removing the wheelset, they are easy to remove the whole wheel, gear and axle assembly coming out together. Once I’ve done that I replace the keeper plate, this keeps all the components together whilst you don’t need them and holds the centre sprung axle mount in position too.

The cranks and rods need removing, these are held in place by two lugs on the end of the crank molding seen here. You may need to squeeze these with a pair of tweezers to release them, and then pull the crank and rod away from the wheelset, it is a firm fit so expect a bit of resistance as you remove them. Doing it this way keeps the wheels quartered and reduces the workload of the conversion. You can see the left hand pin has already been replaced on this axle set.

This second image above gives a better view of the fittings as they are dissassembled.

The Bachmann crankpins need to be removed, the easiest way I found, and its a bit crude, was to file the inside end of the crankpin. This allows you to part the crankpin and rods from the molding and if you do it carefully the pins will push outwards, out of the crank from the end you’ve filed.

You need to do this for all six cranks, however I worked on one set of rods or side if you like, at a time. Once the Bachmann crankpins had been removed I replaced them with the Markits/Romford versions. 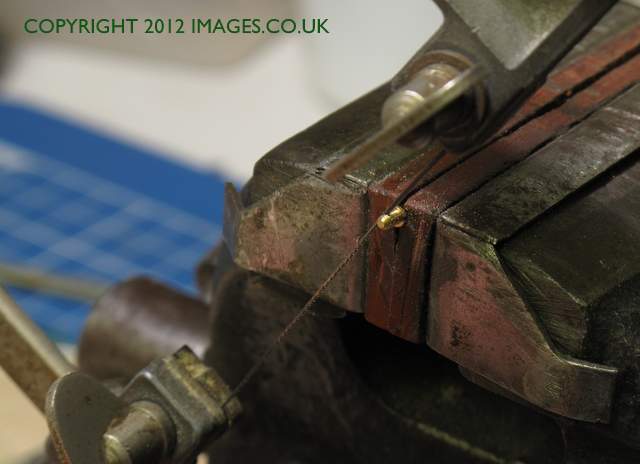 These were cut to length, again nothing scientific here, but about three threads of the screw was the ‘measure. These were cut one at a time with a fret saw, and then screwed, self tapping into the Bachmann crank. By fortune they are just oversize for the hole left by the original pins so this method fixes the new pins in place too. At this point the rods are made up as per the instructions from the Brassmasters PDF, downloadable from their site. The Markits crankpin diameter is marginally smaller than the etched rod crankpin holes so they fit perfectly. I used the main structure of the rods but omitted the cosmetic bosses as I was using the Markits crankpin washers. I wanted to keep the assembly within the original chassis loading gauge and this ensured that worked. Tapping the knuckle joint rivet through was a little tense, its ages since I’d done one (fifteen plus years), but a couple of gentle taps gives a prototypical joint on the connecting rod. 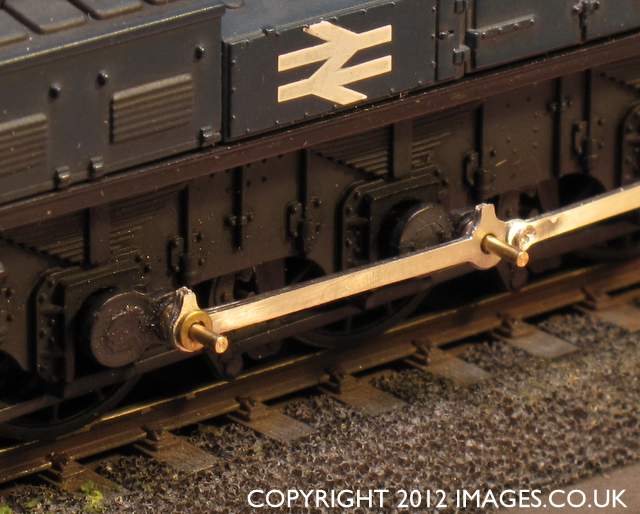 I made sure that the rods worked well, i.e. they weren’t tight at the knuckle and re-assembled the chassis, leaving off the brakegear. This means replacing the wheelsets only as the rods aren’t fixed yet. 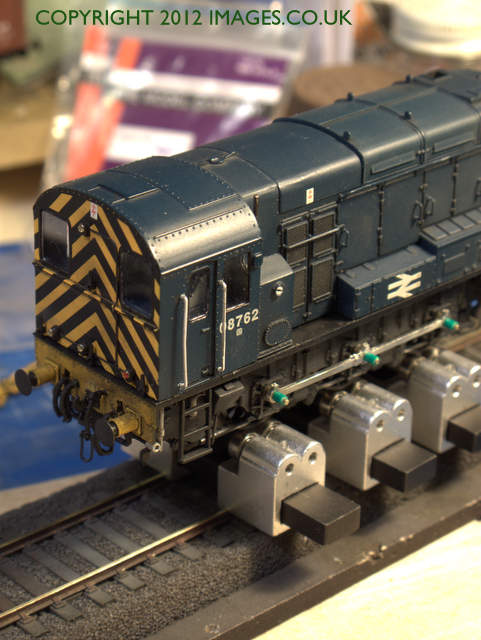 To make sure the chassis ran well I slipped the rods onto the crankpins, and held the rods in place with plastic sleeves. This allowed me to run the chassis and see if there are any tightspots and that the rods are working well.

Once happy the locomotive ran well and slowly with no binding I fitted the brakegear and ran the test again, to make suire there were no clearance issues I’d missed. Satisfied there weren’t it was then time to fix the rods for real. I’d taken the easy option again and decided to solder the crankpin washers to the crankpins, cut them to length and then file flush. 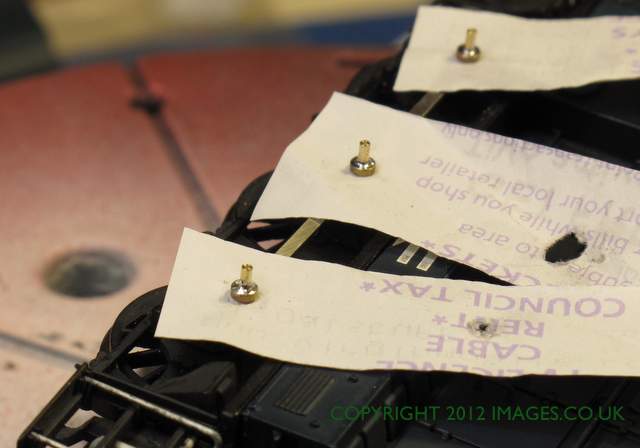 This is a quick method of fixing the rods, but it is permanent, then again the originals were too, so you’re not losing any functionality by doing this. Make sure the rods are on the right way up, and use a barrier paper like I have here. Once they are soldered you can disassemble them and cut the extra length away, I used a fret saw again and filed them flush to the crankpin. The last job is to paint the rods, I did this using enamels and then gave the rods, crankpins and wheels a light weathering using MIG pigments. The loco’s had already been weathered with a mix of acrylics, enamels, MIG pigments and artists pastels, (yes you can mix em all if you’re careful) and were now really coming together.

The final touches, adding Shawplans EEFG0802 08 Laserglaze windows to the cabs and renumbering them using Pressfix transfers, choosing pre TOPS early to middle 1970 liveries. This included removing double arrow logos from the battery box doors on one loco, and replacing them to the bonnet doors. The reason being the bonnet door variety was far more prevalent and having two battery boxed examples, (my Hornby 08 is identical) seemed too much of a cliche. These engines are partly for a 1967-72 era layout that a friend is working on, but they’ve also sparked me off on my first ‘micro layout’, something I didn’t forsee at all! 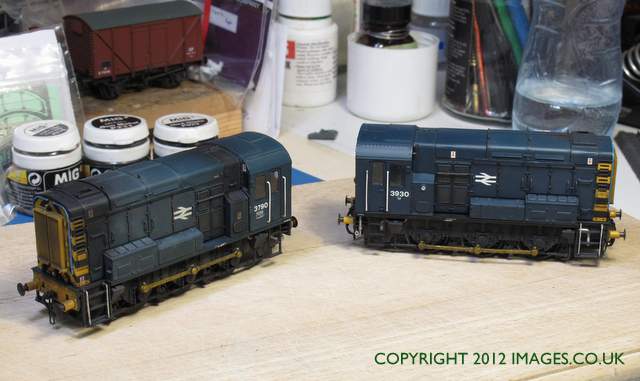 It’s taken a long while to get these three loco’s to where I want them in terms of appearance, partly because I left stuff on the ‘to do’ pile way too long. I actually like them better than my Hornby 08’s now, and thats because I’ve put something into them, they’re unique, a model with my ‘stamp’ on it, and without me making that effort, they’d each just be another Bachmann 08.