To date there’s not been much in this blog section regarding the build of Albion Yard and how its developed over the years. In this Septembers Railway Modeller the layout is featured in a break from the normal style of layout presentation article. The article is an interview where Steve Flint, the editor, and I sat down and talked about the layout and its development. It was all the more interesting to do as Steve hasn’t actually seen the layout first hand, but has seen it appear as a photo set in videos, various magazines including Railway Modeller, Model Railroader and MRJ. On its old fotopic site the layout galleries received over 200,000 views, which always pleasantly surprised me.

It’ll be interesting to hear if the style of article was of interest, feel free to post comments here or email the team at Railway Modeller. There are a couple more pieces in the pipeline about the layout, for a number of magazines. All of them will take a different view or aspect for discussion with new images, as its important for me that each piece if used says something new or different about the layout or any of its features. 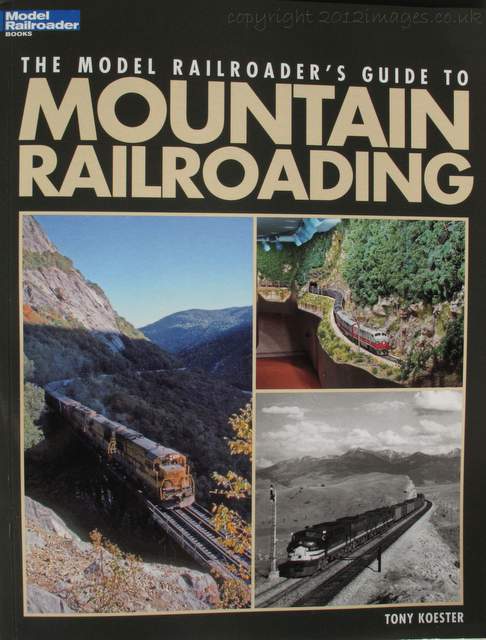 One book I’ve recently read is Kalmbachs Guide to modelling Mountain Railroad’s. Written by Tony Koester the title doesn’t quite match the book as it isn’t so much a guide, as a well laid out series of chapters as discussion points. If you’re looking for ‘how to make’ a high country or hilly layout this probably isn’t for you. What this book does is sets out the various considerations to make before deciding to build such a layout, comparing and contrasting advantages and disadvantages of the types of layout, scenery, gauge and scale, era, locomotives, rolling stock and operation.

The illustrations are both color and black and white, all well produced in the typical Kalmbach house style. Whilst written primarily for the North American market and layout styles, there is plenty of food for thought for other modellers. Many of the discussion points work equally well changing the prototype for a UK or European theme. Many of us want to build various prototypes and eras, much of the content translates to factors that affect any railway wherever its located, and I found that I was thinking much more about how I chose settings and prototype in the past and those I have in mind for the future. On the basis that it got me mentally reviewing those factors I feel it was good value for money, and book that I’m likely to return to in the future.