Keeping to the theme of making things that look like something else, here’s a part converted Airfix LMS Brake Van. I have three of them two fitted and this one which was unfitted and had been pulled apart for test fitting of Shawplans laser cut glazing. It was one of those ‘one day’ projects to put it back together with a bit of extra detail. Well I decided that I’d ring the changes and make a representation of the Diag.1890 LMS brake van with the veranda entry next to the cabin. The subsequent van as modelled by Airfix was a later variant of this diagram van that I’m representing. So far so good I’m quite pleased with it. I’ve to scribe end planks, fit stantions to either end of the veranda’s lengthen the foot boards, replace handrails and that’s about it. Re paint it and from a normal viewing distance the ‘blagged’ element will not be too visible, but the finished van will look very different.

The makeover of Hornby’s Railroad Class 40 is now complete, and this shot shows just how much you can transform the appearance with a little bit of effort. There are still a multitude of things wrong with it, but the makeover has masked those errors to a degree that I’m satisfied with. By the time its seen clawing its way across the Settle and Carlisle line on a mix of primarily blue and grey Mk1’s with a couple of Maroon ones thrown in, few people will notice the discrepancies, the overall picture being greater than the separate elements. 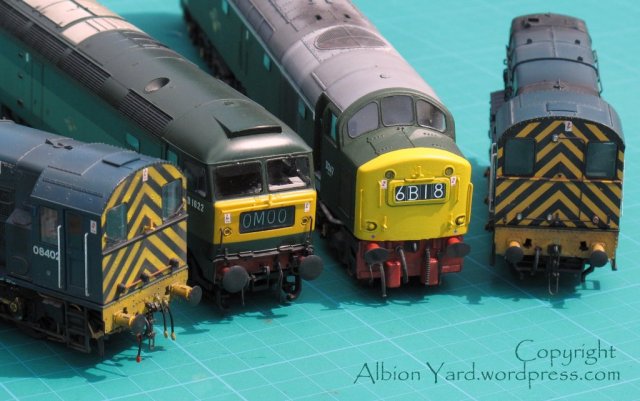 I don’t know if I am what is sometimes referred to as a D&E modeller, but it was interesting just getting a couple of locos to hand for this image. All of them are Ready To Run (RTR) models but with a significant part of ‘me’ put into them. Many of my mates are the same, RTR is often the starting point to make it better, regardless of if its a 30 year old Airfix Brake van above or the latest Hornby/Bachmann release. Similar to the ‘focus’ of the layout being sharpened, http://albion-yard-cinderford/ I’ve noticed a subconscious tightening up in the era of diesel models I prefer to work on and keep. This has pretty much dropped into 1968 to 1978, with a little latitude of a few years at either end. The new layout I’m working on for a media project sits firmly in that era and will hopefully appeal to both dyed in the wool contemporary ‘D&E’ and historic steam modellers too. The class 40 and the 47 will be part of operating stock on a S&C project a few years away, but in the meantime I’m definitely drawn to this ten to fifteen year period part of it being the era I took most interest in watching trains.

I do have a cross over project too mixing my steam and diesel interests which will involve a certain BR/WR Pannier which I’ll have to have complete by September, as will a makeover of the Hornby 42xx which I think is a pretty good starting point. I’ll post more on those in due course.

In the meantime its back to gluing flexitrack and points down to foam underlay with Superglue. Yes you read that right, and, it works!

Not Everyone
Works For Peanuts …

3 Responses to The Impressionists IV