When you’re digging a hole…

Often said, when you’re digging a hole, know when to stop! I’d been pushing on with my Southern Electric project, and it wasn’t lighting my fire as it should. It’s at this point it’s a good idea to take stock, and I did, literally. I was in discussion with a few good friends around the Southern project and I used a set of scratch built Great Central platform buildings to mock up the island platform structures with the EMU’s in place. This just emphasised that the whole thing wasn’t working. So that’s where we are today, filling in the holes. What I’m using is really neat stuff, Vallejo Plastic Putty, an acrylic resin filler. It has the consistency of toothpaste and can fill tiny gaps to quite big ones like wing root joints on model aircraft. That’s what the white blotches is on the sleepers, where the third rail ceramic pots left drilled holes I can backfill them easily and quickly with this stuff. After a few hours I’ll sand the excess flat and repaint the track, the putty takes all kinds of paint with no ill effect. 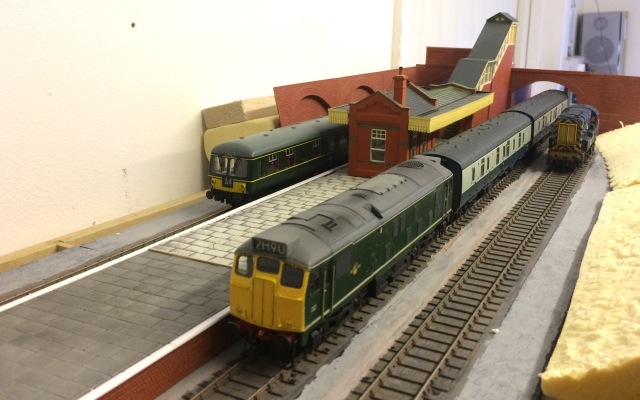 The Southern electric stuff is back in its boxes. They’ll be back in the future that scratch is still itching! Over the past few years like many of us I took the opportunity to stock up when RTR prices were low, “we neva  ad it so good”, buying cheap second hand Diesel transition DMU’s (only a few) for a future project. Well that time has arrived.

Using the GC buildings (scratch built), that I had in stock for the layout mock up looked instantly right on the island platform. No great surprise there, it’s almost a standard GC design. Add a few DMU’s and I’m back commuting to Bicester from Marylebone in the late 80’s,  so visually I was sold on how the layout would look, the plausibility gap had been crossed! Next is does whatever is ‘in stock’ suit? Largely, yes it can, the concept being an East Midlands location in North Nottinghamshire with a crossover between Midland and Eastern Region. Nothing new here, Frank Dyers Borchester many years ago was placed in the same geography, and this idea is firmly in that territory, but the emphasis being that the GC made bigger inroads than they did historically. 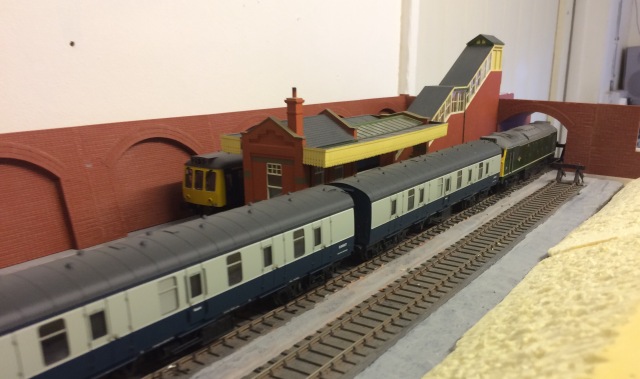 This then, is Wellow, just to the east of Tuxford on the LDECR line, taken over and upgraded in typical GC style. At Wellow there was a small junction joining the north and south colliery routes from local pits. The Viaduct across the Trent at Fledborough is still open and the collieries delivering to High Marnham on the banks of the Trent. 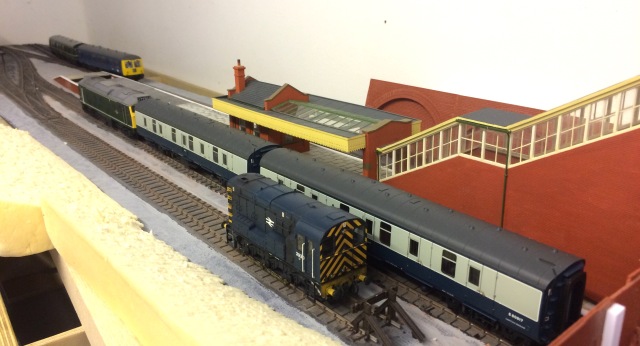 Cut into the low hillside at the southern edge of the Vale of York lies Wellow, truncated and lines closing around it, the era will be 1969 through to 1977, allowing the change from green to blue, including pre and post TOPS, and head codes to 0000, and marker light white dots. The post Beeching blight will be making its presence felt, the line finally succumbing to reality in the early 80’s.

4 Responses to When you’re digging a hole…