Motivation Monday, Back to the future!

These three are some of the key motivators for me, and looking for some data for a friends potential product the other day, I rediscovered them in the man cave.

Centre stage is the first Wild Swan magazine, British Railway Journal. It immediately broke the magazine mould of the time with its appearance and quality of content. Tantalisingly it had some interesting modelling items in it, very much finescale oriented, and within two years the preview edition of Model Railway Journal had arrived in 1985. My late father on the right had by this time changed to live steam model engineering, but his 4mm modelling had set the seed for me.

By coincidence these past two weeks have seen me going back to the late 70’s and eighties, initially giving an Airfix LMS 20T brake van a quick makeover.

The core structure, shape and measurements of the Airfix railway range were generally very good, and sitting on the shelf of doom were a handful of items waiting for a breath of life.

The first easy fix I went for involved raiding the bits box for scraps of plastic rod and unused brake gear which were fitted after the running board supports had been thinned or replaced, and the original in line brake blocks removed. They’re not copies of the real thing, but enough to fool the eye, and make the brakes and chassis look a similar standard to other models in the fleet. Rumney Models lamp irons, Shawplan laserglaze, and some 0.5mm handrail wire completes the illusion..

The other batch of shelf queens looking at me were two pairs of Airfix B Sets. I’d started these a while back when intending to build New Radnor as a shelf layout, and wrote a planning article in Railway Modeller on the location. It still appeals assuming Mr Forster doesn’t beat me too it!.. 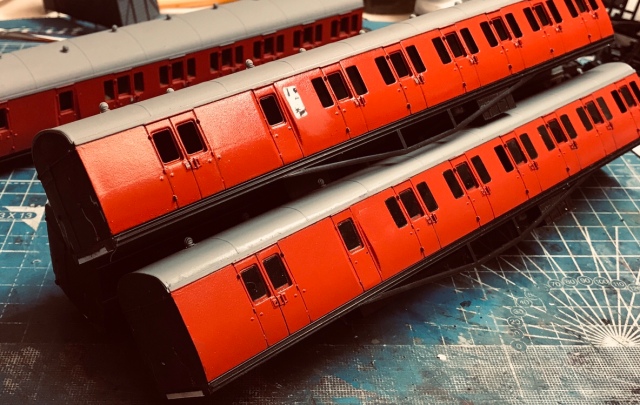 So the other day these too were pulled off the shelf and onto the bench. Like most of us who plan these projects, I’ve got most of what I need in stock, just motivation and time seeping past! As with the LMS brake above the core dimensions and shape of this B Set are solid, so an excellent starting point. Airfix mirrored both sides which led to an extra window in the guards van being included, this is the first fill and fix to do. We used these bodies when Shawplan tooled the laserglaze set for them and included an extra window as a blanking plate for the incorrect van window. The E140 diagram had two different types of bogies, so one set will have short bogies, the other will have replacement long bogies, these coming from an Airfix Siphon also on the shelf of doom. There’s a pattern here..

The idea is to give these a makeover to allow them to stand alongside the Hornby Collett and Hawksworth coaches without them standing out. The body mods include new door handles, flush windows from Shawplan, and the bow end detailing being improved with separate components such as lamp irons and conduit cables. The chassis is where the time will go, revised buffer beams (flat) and drawgear, truss rods added with a representation of the brakegear and new wheels, bogies and steps as required. Then into paint for a late 1950’s careworn finish. It’s not a huge amount of work, there’s four of them so most of the work will be done in batch building, sometimes that gets a bit tedious, but with only four vehicles to do, not too onerous. When I think about it the coaches and brake shown here were very much RTR state of the art when BRJ/MRJ were in their infancy. It’s very much back to the future for these five items, they were bought new about thirty years ago, and are getting a refit to make them blend into today’s standards, I’m quite pleased with that. Siphons next?…

1 Response to Motivation Monday, Back to the future!