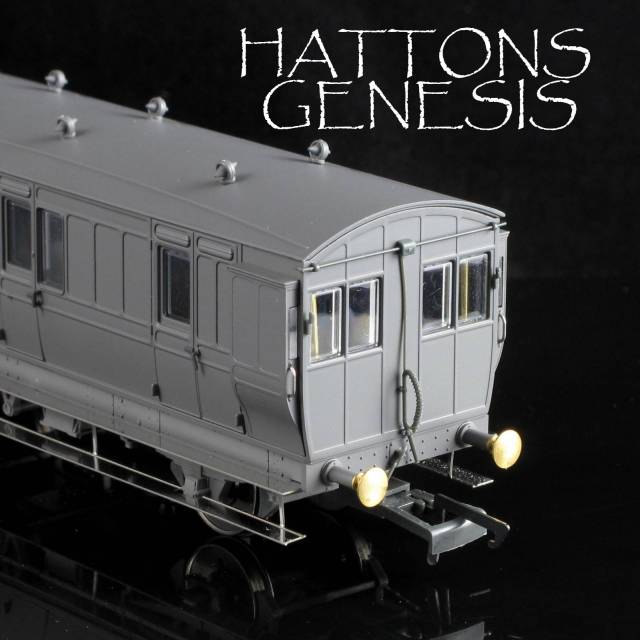 It’s not often the hobby gets a bit of a kick up the arse with a new release, and throws a little bit of controversy in for good measure, but Hattons are showing the potential to do just that, with their range of ‘Hattons Originals’ Genesis coaches in 4mm scale. These (if you’ve not heard), are a range of pre group style coaches to a generic freelance design in OO gauge. Hattons have generously allowed the blog to have a look at the Engineering Prototypes of this interesting range of coaches, and for me they show great promise in addressing a gap in the market, Pre Grouping rolling stock. This isn’t a review of the stock, they’re not released yet, but an overview of the EP’s at the current state of development Q3 2020.

Noting that there were pre group locomotives being introduced into the Ready to Run pool and the sales of them were healthy, Hattons looked at what stock was available to be paired with them. Prior to this ranges concept, there were, and are, very few pre-group RTR coaches available. They either fell into the top end of the market with Bachmann and Hornby’s SECR Birdcage stock, or LSWR stock respectively. At the other end of the availability range were old tooling four wheel stock very much from the Hornby train set, and Clerestory stock again of significant vintage and crude details. It made sense then for Hattons to look at the obvious gap appearing in the market for coaching stock of pre-group era’s.

The next part was to decide what to actually place into the market, with the obvious caveat that the product will have to make money and at the very least ‘wash its face’ as far as production costs go. After taking an overview of the existing RTR stock in the market, the most visible gap was the short wheelbase stock so this was the avenue taken. It became clear early on that if a range of good quality generic type coaches were introduced, it could cover a wide range of prototypes and companies. This for me is where the thinking is really clever. We know that if you make a model of X, then the market will accept it as that, and praise or criticise accordingly. Authenticity, including colour schemes play a significant role in this, so if you relivery an SECR Birdcage brake into LNWR colours it immediately looks wrong, and you can only imagine the online critique! The fascinating thing for me is that I can ‘accept’ these freelance coaches in authentic liveries. Had Hattons chosen the path of one company prototype and then put them into other companies liveries, I think the mental leap would be much harder. I have no idea why this is, but it just ‘works’. They’re marketed as a ‘freelance’, or prototypically literate design, and I can buy into that, even with prototypical liveries. The option for a plain vanilla brown light railway set with generic markings might be a useful release too. It’s undoubtedly a brave decision to make freelance stock, and to place it into a market with high (sometimes unrealistic), expectations, however that’s exactly the path Hattons have taken.

The range so far includes three different design brake vehicles, and three passenger coaches. To make the product ‘work’ the stock had to appear plausible, and working with the Vintage Carriage Trust and experts in Pre-Group rolling stock the initial designs were worked up. From the start interior lighting had been a design factor, which has been included within the range. These all had a common style, and options for gas, oil or electrical lighting, depending on the livery application era. Using customer feedback the designs have been refined with adjustments to some compartment widths, reinforcing factors like four wheel stock gave more potential for liveries using longer vehicles.

The six wheel stock is a welcome and unusual prototype, and in the past RTR six wheel stock has had a very indifferent history as far as track holding and looking ‘right’ goes. The Hattons solution is a simple lateral sliding tray holding the centre wheel set. Across Peco Code 75/100 streamline and Bullhead range the coaches rode well, as they also did on Kato Unitrack. Wheels are one of two types either plain two hole disc, or Mansell, and fitted to appropriate era livery stock. All wheels ran smoothly and true, they appeared to be stub axles fitted to a central plastic axle. As they were EP’s I left the tools to one side!

The coaches show no tendency to derail and the lateral movement of the centre axle is extremely subtle, not really being noticeable on 3rd radius curves or through medium radius Peco streamline including single and double slips.

Please note these are EP’s and they’ve worked for their money! on the images of the six wheel stock you can see a slight bowing in the centre of the chassis, this is already noted by the Hattons team and amendments to the body/chassis fixing is underway to redress this issue.

The tension lock couplings are mounted on a fixed point at the end of the coaches and a self centre spring is integral in the design to keep the coupling central. Again these EP’s have had a tough life so far and the couplings are a bit loose, which also has been noted for improvement by Hattons.

Overall the tooling and details of the range of coaches is well up to contemporary expected standards. Three types of lighting are represented, gas, oil and electric. Lamp brackets, individual handrails and door handles are fitted where appropriate, and the underframe details are co-ordinated with the roof lighting details. The fittings and conduits of these components to represent the different types of lighting are well tooled with the finesse you’d expect from a contemporary release from a larger manufacturer. Inside the coach 1st class seating is represented and overhead luggage racks are included in all types. Not all types of lighting will be available in all liveries, however the livery for each model will be an appropriate era livery for the details represented.

Brake gear, brake yokes and pull rods are configured for OO 16.5mm gauge, and look a good compromise between finesse and the robustness required. I’ve mentioned the axle length and the fittings around the wheelsets, there’s a good reason for this. I can see these models being of interest to some modellers building in EM ad P4, even in the just getting something running category. Running/foot boards are sturdy etched pieces which can be carefully removed by the user as they are screw attached. Packaging is expected to be clear clam shell type in a card external carton.

The LED lighting for the coaches is taken from the track, and purchasers can choose if they want lit vehicles or not on ordering. The price differential is currently (Q3 2020), only £6.00 per coach, so well worth considering. The electrical collection is from the wheels to a phosphor bronze strip which forms part of the axle guard. I didn’t investigate further but the axle length is very close to 26mm, and looks a similar installation to the Bachmann first generation DMU releases. The lights themselves are LED’s fixed into a roof panel with leg electrical connections at each corner.

LED’s are spaced to match the compartment spacing so each compartment is individually lit.

On these EP’s the lighting was bright under DC use and exhibited some flickering, the colour of the lighting is a nice warm yellow hue rather than at the blue end of the spectrum.

The lighting is under review with the potential for a capacitor to smooth the flickering and reducing to a more subdued illumination. Commendably the roof is light tight around its entire footprint.

Access to the interior is simply removing the roof, held on by discreet clips at the end of the vehicles.

These models are arguably a step back to a manufacturer deliberately using the same model to represent a host of different railway companies stock, a common practice in the not too distant past. However with the potential for pre-group modellers layouts to have authentic looking coaching stock there’s potential to open up that sector to more accurate rolling stock loco’s and infrastructure. 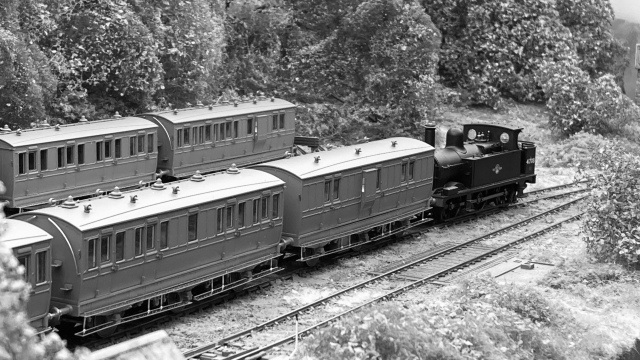 I do wonder if there’s an opportunity to see these scaled up into 7mm O scale too in the future. These definitely go against the grain, but in my opinion are a case of one step backwards, and two forwards! What is noticeable with the rake of them together is that a train of these ‘short’ vehicles in a small terminus, immediately looks better visually, than a similar length train with longer vehicles. 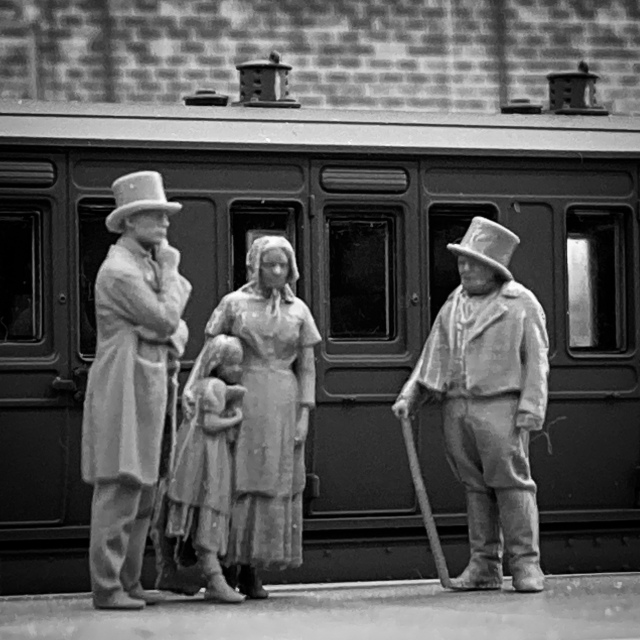 On Shelfie3, the platforms are currently just on 3ft long, so a 3 car DMU or type 2 and two MK1’s, and it’s noticeable how short the train looks. If you replace them with these coaches there’s an immediate optical illusion that the platforms and trains are longer. I’ve looked at Cyril Freezer’s Minories design many a time, its a bucket list layout, and probably is too for quite a few readers. When you actually mock it up in 4mm using Peco large radius points, the required platform length immediately stretches the layout and takes away some of its charm. Minories was designed after all when we had Triang shortie stock and tight radii ready to lay points.

This stock I think used on a contemporary build, could make the original size Minories much more visually appealing. Certainly more viable in a slightly enlarged footprint today, and might just open up more of that type of genre, will we see (Urban) ULT’s replacing BLT’s? Well I hope so. Will they transform the hobby? I think they might just do that with RTR Pre-Group modelling, they’ll allow modellers to explore that era more. Perhaps with less concerns about having to build from etched kits immediately, still the most common source of pre-group coaching stock.