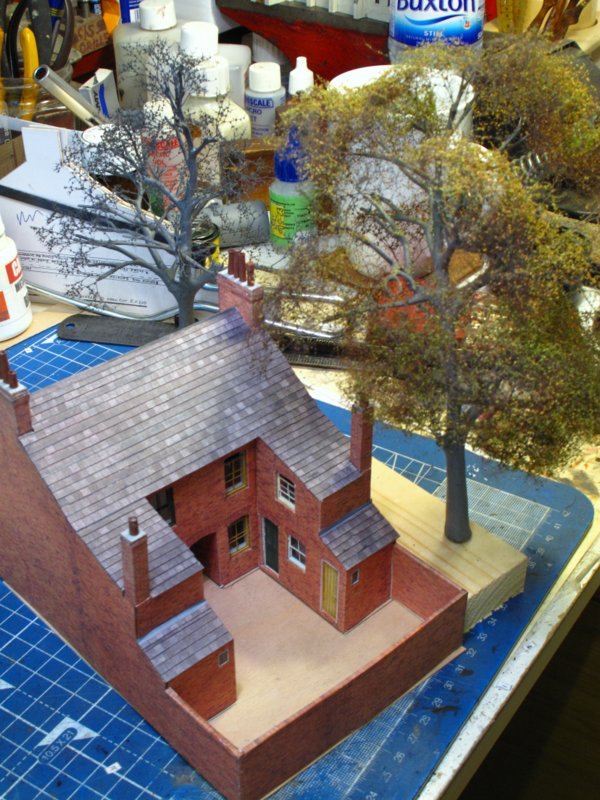 These are the latest scenic items coming off the bench in preparation for Railex. They are a straightforward build of a Howard Scenics ‘house back’ kit, and two trees, one complete with foliage and the other the bare structure awaiting finishing. The trees are an adaption of a technique used by Simon Thompson on his Scaleseven ‘Y-Cae’ and ‘Aberbeeg’ layouts both of which I’ve had the pleasure of operating.

I primarily model in 4mm scale, but will always look at other scales and modelling genres for inspiration and ideas that I can use or adapt in my own work, I find it mildly frustrating when I hear a modeller say oh its X or Y, so it’s not of interest. I can understand the prototype not being of interest in era, or protoype for example, but to dismiss modelling like that means the individual my be missing out on seeing or learning a new technique that will work for them, or allow them to adapt it. 7mm isn’t a big interest of mine but missing Simon’s trees would have made making mine much harder, and probably they’d not be as good as they’ve come out either.

Another building completed recently is the agricultural merchant for Albion Yard, this will appear in an article for Railway Modeller in due course. The building is unusual for me in that the side you see here faces away from the viewer, so it’s never seen on the layout. Normally I leave the unseen face blank, the house above has no front for example, but this building just seemed to suit being made ‘in the round’, so, that’s what I did.

And to finish a gratuitous shot of a class 37 on Simons ‘Y-Cae’ layout, this is exactly the sort of view that makes me think, I want to make something. Next time you’re at a show, go and have a look at something that doesn’t interest you, you might just be pleasantly surprised.