Fog in the Forest

One of those cold damp autumn mornings, winter’s definitely on its way ..

I’ve had a couple of queries regarding the dry ice we used in some of the pictures for Model Rail 186. The photoshoot for Model Rail 186 was one of the most interesting and challenging sets I’ve ever done. The magazine shots were all taken by Chris Nevard and ranged from those taken at home and on location at Model Rail Live at Barrow Hill last year. Hopefully Chris will get the opportunity to use some more of his ‘fog’ shots, having seen the proofs, they are absolutely stunning. The autumn lighting effect Chris got I felt captured what I wanted to achieve with the model and I felt that to use some of the fog shots was an excellent choice by the editorial team. 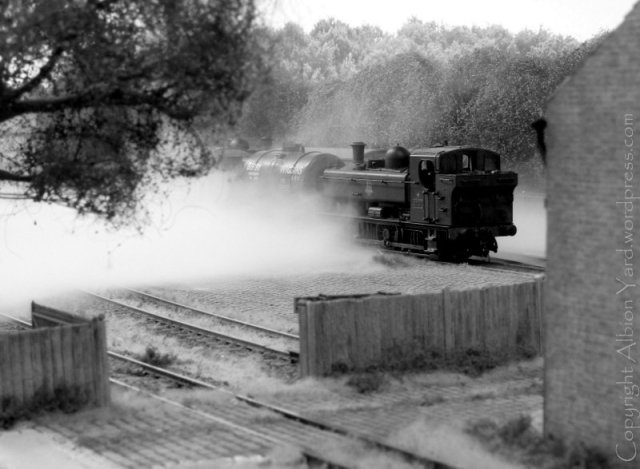 At the end of the shoot I had some dry ice left and had a go myself. The pictures shown here are some of those from my solo session later on, and what you see is what you get, there’s no photoshop manipulation here. All I’ve done here is some changes made in Google Picassa, primarily using the black and white functions. Pictures were taken with a Canon G10.

A word of caution though, dry ice is potentially dangerous. It is very cold, its around -80c/-110F so you can’t just pick it up, it burns, you need proper handling gloves! It needs transporting and storing with caution, some couriers won’t handle it, and it literally is an oxygen thief. We were very careful that the studio we’d made was large enough to work with the amount of carbon dioxide we were adding. To give an idea of the properties of this material we had a large rectangular bucket for the waste material, this was so cold it froze to the floor overnight and had to be chipped off the floor the following morning. The temperature in the studio, roughly double garage size, was noticeably cooler than outside. In January I was opening the door to let the heat in ..

It is a material I’d use again, but the shoot we did really underlined that its not stuff to be fooled around with. Oh, and the final note of caution, it burns your wallet too!

6 Responses to Fog in the Forest