I’ve written in the two layout articles that have been published that Albion Yard was/is to be scrapped, and that feeling of there still being value for me in getting something out of it modelling wise, resulted in it not being scrapped yet. After a lengthy chat with one of my operators and a few emails from others I think there is still a bit more to come from the layout in its British guise. What is key for me is that if it appears in print again, and there is some potential for that, it has to tell a different element of the layouts story as well as a bit of the technical and prototype inspiration behind it. In addition to that the photos should be targeted to that piece of writing too and try and show something different as well. Unless I’m specifically talking about the history and physical development of the layout there’s little point in putting up images of it which are six years old. So much has changed in its appearance since then, the real constant being the track plan, and even that’s changed. After Warley I’ll take a breather with the layout and make a final decision as to whether to modify it further, it would be a logical extension of the layouts prototype story, but depends on if there’s enough modelling value from it for me. It certainly won’t be back on the exhibition circuit as Albion Yard though, Warley is the layouts final show. 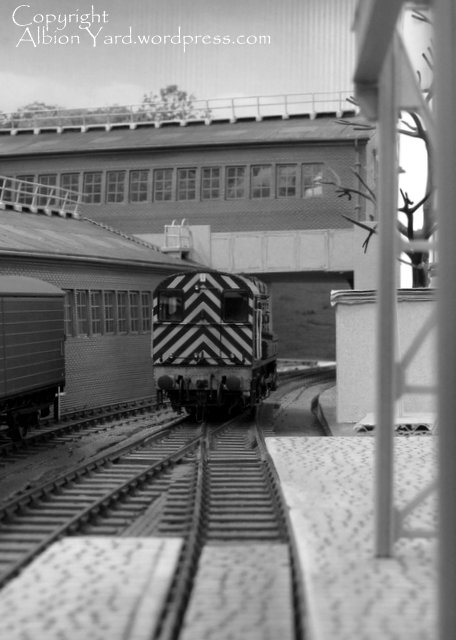 In terms of layout work Wharfedale Road above is the current project and the images above shows some of my ‘Typical Smoke and Mirrors’ as a good mate entertainingly called it. What you see is what you get, this section is about 18 inches long and there’s no photoshop here. Its a micro layout, the first I’ve really done, following a plan from my good friend Paul Lunn. everything you can see in the picture apart from the track and stone setts is removable providing a jig saw assembly. It’s an urban shunting yard which has some good realistic operating potential, thanks to the careful and prototypical attention to detail that Paul Lunn takes. I’m hoping to have it completed in time for Model Rail Live, http://www.modelraillive.co.uk/  where Paul may have it as part of his layout planning clinic, I’ll confirm if we’re taking it along closer to the day. Albion Yard will be there too in its familiar Western Region, Forest of Dean set up.